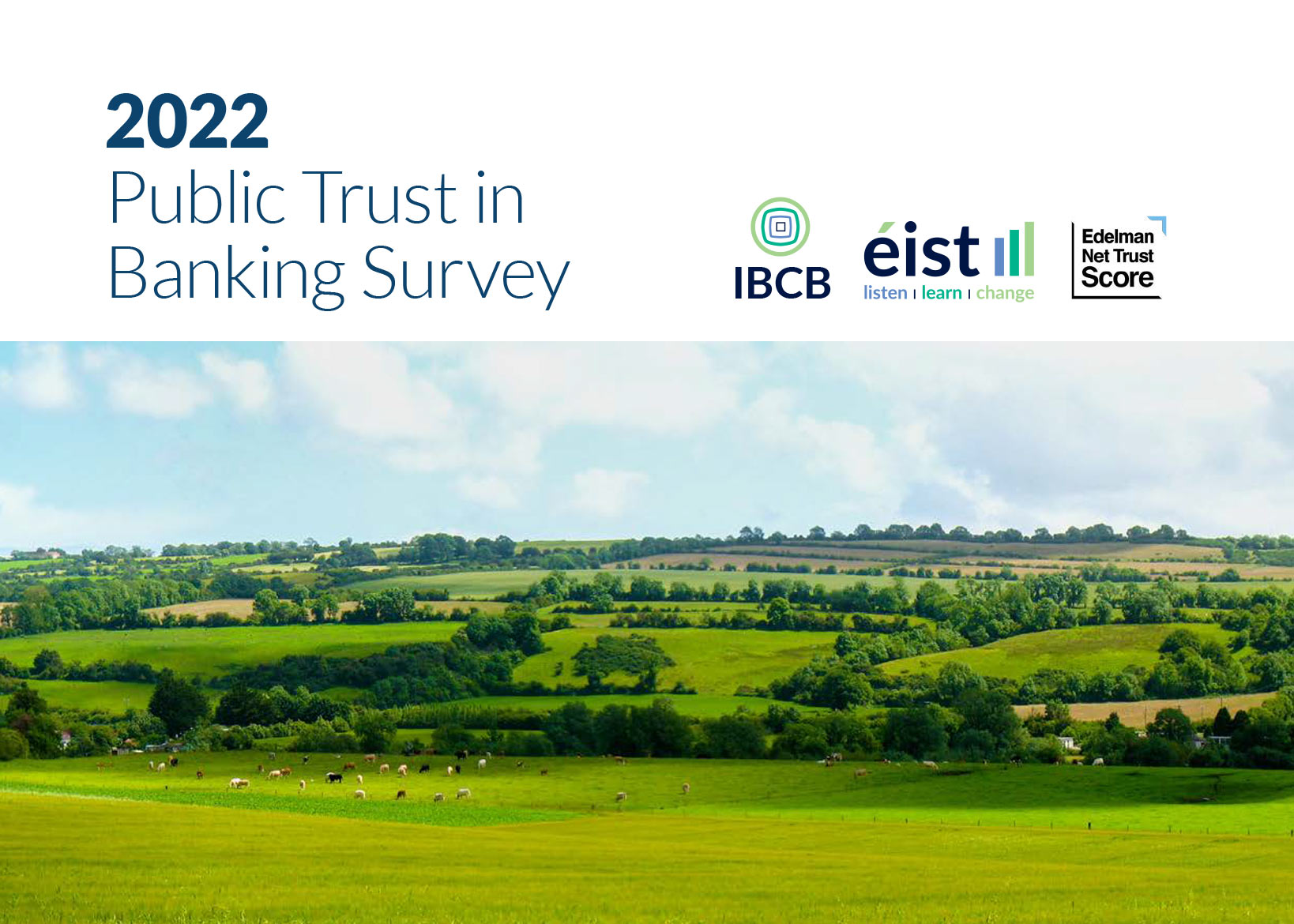 11 July 2022: The Irish Banking Culture Board (IBCB), which was established to facilitate cultural change in banking in Ireland, today publishes its 2022 éist report, the second survey of public trust in banking following the publication of the first report in 2021. The éist survey, based on the Edelman Trust research model, shows that trust amongst the Irish public in banks remains low but stable with evidence of increasing trust amongst SMEs but an absence of trust amongst farmers, who were surveyed as a specific cohort for the first time this year.

This year’s report is published against a backdrop of significant societal volatility, including an emerging cost of living crisis, ongoing uncertainty created by Brexit, a war in mainland Europe and significant change in the Irish banking market, with the impending departure of two of the five main retail banks.

CEO of the IBCB Marion Kelly, commented “This year’s éist findings, which will inform the work programme of the IBCB over the next year, are a clear illustration of the extent of the challenge in changing banking culture in Ireland. Progress is being made but the process of cultural improvement will take time. The survey results point to concerns regarding the wider economy, cost of living pressures and issues around account switching due to the impending exit of Ulster Bank and KBC Bank Ireland from the Irish market. Increased concerns regarding the risk of fraud are also evident. It is important that banks support their customers during the difficulties ahead, particularly in relation to those impacted by the need to change their banking relationships. The results from the farming sector point to an urgent need for the banking sector to engage with these customers and this will be a priority for the IBCB in the coming months”

The research found that trust in the banking sector remains stable, improving slightly in comparison to last year, which is significant given the backdrop of societal volatility against which the survey fieldwork was conducted. While the overall trust score for the general population has increased by three points, compared to last year, it remains low at -25. Encouragingly, the trust score for the SME sector continues to trend in a positive direction standing at -7, an improvement of six points on last year. However, there is a clear absence of trust amongst the farming community, who were surveyed as a specific cohort for the first time this year, and who registered a –77 trust score, ranking significantly lower than both the general population and SMEs.

Encouragingly, levels of trust in the SME sector are moving in a positive direction against all four dimensions of trust: Ability, Integrity, Dependability, and Purpose. The report found that the relationships businesses form with banks in securing credit and managing their ongoing finances is contributing to an increasingly positive sentiment. Replicating this across the general population and amongst the farming cohort is key.

The farming sector clearly requires an urgent focus by banks to address very low levels of trust. Knowing the scale of the challenge being faced is the first step in addressing it. The data is stark, but how the trust deficit can be bridged is evident in the words of the farmers themselves and the specific issues they highlight. These words offer an appropriate point of departure on the journey to rebuilding trust with the farming community.

Speaking about the publication of éist 2022, Chairman Mr. Justice John Hedigan said ‘‘It is clear from this year’s findings that, while there is some evidence of improvement, more work remains to be done to address deeply ingrained feelings of distrust towards the banking sector amongst the Irish public. It is also clear that continued positive behaviour on behalf of retail banks, the evidence of which needs to be both visible to and felt by bank customers, is necessary to further restore public trust in the sector. The IBCB knows that our member banks are working hard to address the trust deficit and have undertaken several positive initiatives that show a commitment to improving the culture of the sector. A focus on customer outcomes will need to be sustained for an extended period before there is significant tangible evidence of improvement in the public’s trust in banking.”

Speaking about the findings in relation to farmers, IBCB Board Member and Treasurer of the Irish Farmers Association, Martin Stapleton, said: “The absence of trust amongst the farming community is an issue that needs to be addressed without delay. Farmers are integral to Ireland’s heritage and economy and their perspective needs to be understood, esteemed, and supported and their needs met by banks. The IBCB is determined play its part in ensuring this takes place.”

As highlighted by the IBCB since its inception, there is no fast fix available to reverse widespread and deeply embedded negative perceptions of banks. Progress is being made; cultural reform is clearly underway, trust levels are improving slowly, and the reality is that public acknowledgement of reform will be based on the lived experience of people’s direct dealings with the sector. Maintaining a consistent focus on customers is critical in making progress on the cultural reform process. The findings contained in the 2022 éist report provide the IBCB with an invaluable insight into the perception of retail banks in Ireland and will inform how the Board will proceed in its pursuit of cultural reform in the sector. The IBCB will continue to assess public sentiment on an ongoing basis and to act on these perspectives.

About the Irish Banking Culture Board:

The Irish Banking Culture Board is an independent industry initiative established and funded by the five retail banks in Ireland (Allied Irish Banks, Bank of Ireland, KBC Bank Ireland, Permanent TSB & Ulster Bank) with the purpose of working with their member banks to build trustworthiness in order to assist the industry in regaining public trust. The Board is independent with a non-banking majority, whose members are drawn from across Irish society. The role of the IBCB is to be an independent voice advocating for cultural change in the Irish banking industry. The IBCB is focused on culture and behavioural change in our member banks, in the knowledge that a changed culture will change outcomes. The IBCB is not a lobbying or representative organisation. It does not act as a regulatory body nor duplicate the work of individual banks, the BPFI or the regulator. For more information www.irishbankingcultureboard.ie

IBCB commissioned Edelman Data & Intelligence to conduct its customer survey of Trust in the Irish banking sector, the ‘éist’ customer survey. Éist is an Irish language word which means ‘listen’, and the results of the survey are intrinsic to the IBCB’s work program, informing the Board and affording the opportunity for both the IBCB and members banks to listen to and act on customer feedback. This report leverages the Edelman Trust Measurement (ETM) framework, a robust, tried, and tested research tool to measure trust in banks amongst a cross section of the general populations, including Small and Medium Enterprises (SMEs). 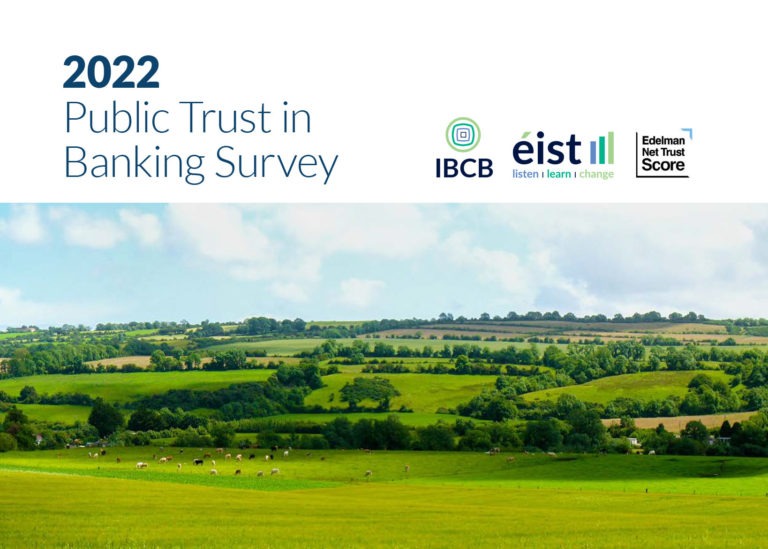 The Board highlights the human cost of tracker failings 23 June 2022: The Irish Banking Culture Board (IBCB) notes today’s announcement and fine from the

IBCB and BPFI announce Guiding Principles for banks support of customers and staff through current account migration  6 May 2022: The Irish Banking Culture Board