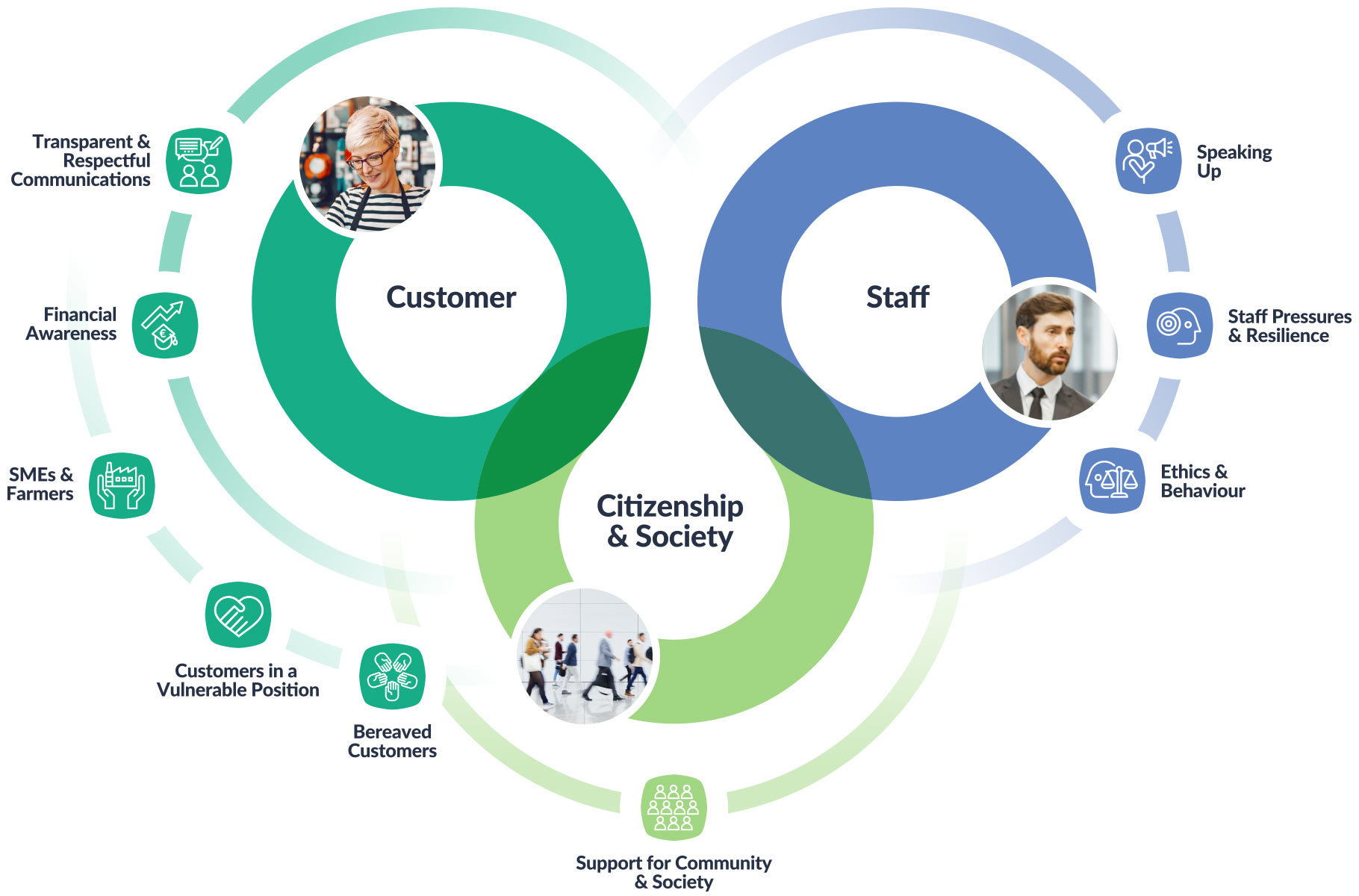 Workstream themes are described in more detail below:

Culture means many things to many people. The initial activities of the IBCB were focussed on particular aspects of cultural change which would resonate with the IBCB’s key stakeholders. For this reason, we decided initially to ask for, listen to and act on the views of those two cohorts of stakeholders most impacted by bank culture – bank staff and bank customers.

Prior to our establishment in 2019 we conducted two pieces of research in this regard. Firstly, we commissioned the UK Banking Standards Board (BSB) to conduct a survey in October 2018 of the 25,000 bank staff across our founding member banks to gauge their views on the internal culture of their institutions. Secondly, we conducted a Public and Stakeholder Consultation exercise.

The findings of these two pieces of research were published in two separate reports in April 2019. These findings set the baseline of what the perceptions are of banking culture in Ireland and what needs to change. These findings were also used to inform our initial Work Programme. The IBCB will continue to refresh this research as part of our ongoing programmes of work, with the launch of our next IBCB Surveys Éist.

Éist is an Irish language word which means listen. We expressly selected this word as since the IBCB was established, one of the most consistent pieces of feedback we have received from bank staff and bank customers alike is that they want banks to listen to them more and to then act on that feedback.

We recognise that Ireland today is diverse, drawn from many cultural and ethnic backgrounds, many have never learned Irish, and even for those who have, it is probably long forgotten at this stage! If you would like to know how to pronounce Éist correctly, the link below may be helpful.

The IBCB Staff Survey, éist, launched in February 2021 across our members banks. We will publish a report on the findings of this survey later this year.

The Bank Sentiment survey is currently in design and is due to launch in Q1 2021. It will include consumers and SMEs. We will publish a report on the findings of this survey later this year.

Our Work Programme is comprised of three pillars of focus;

One focussing on internal aspects of bank culture – including issues such as Ethics & Behaviour, Speaking Up (& being heard) and Staff Pressures and Resilience;

and, the third pillar will focus on Citizenship and Society, which is focussed on the societal role and contribution of the Irish banking industry.